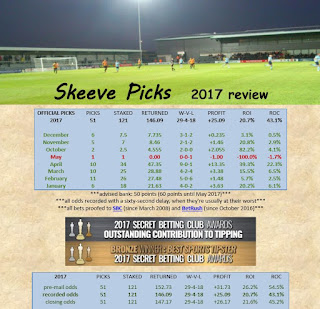 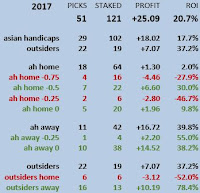 2017 was another excellent year here at Skeeve Picks. The official profit of +25.09 points at a 20.7% ROI and a 43.1% ROC means it was the best year in terms of ROC since 2011 and the best year in terms of ROI since 2009 (!), but as always, there were ways of achieving even better results. For instance, the results based on closing odds (+26.17 points profit at a 21.6% ROI and a 45.2% ROC) have once again outperformed the official results and most of us (myself included, of course) are now using a forty-point bank instead of the officially recommended fifty-point bank.

Only one of the eight "active" months in 2017 failed to produce some profit - that was May with it's one play-off bet that failed miserably. The other seven months were all profitable, the best of which by far was April with nine of the ten bets landing (+13.35 points profit at a 39.3% ROI). There were 25 "active" weekends in 2017, 18 of which were profitable, and the worst losing run was only -4.8 points (February 18 - February 25). 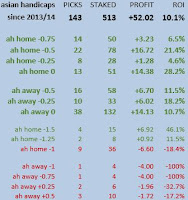 The bets on outsiders had another excellent year as well - that's +7.07 points profit at a 37.2% ROI, but as you can see, the bets on away outsiders are doing much, much better than the bets on home outsiders, which is why there were no bets on home outsiders so far this season (since May) and I'd need to see plenty of value indeed to advise an official outsider bet on a home team in the 2nd half of the current (2017/18) season. Since I've first started advising the bets on outsiders in 2015 (at one-point flat stakes during the 2nd half of the season and at half-a-point flat stakes during the 1st half of the season, so in October, November and December), 70 picks produced +25.67 points profit at a 41.4% ROI (the outsider bets were only advised as unofficial picks in early 2015, before the start of the 2015/16 season, and as official picks ever since). I'll write a lot more about the bets on outsiders in the 2017/18 season review as well.

As I've only mentioned these alternative ways of taking the bets shortly before the start of the current (2017/18) season for the first time (and only because I found out about clients who are taking these kinds of bets instead of the official bets), I can't officially recommend taking these bets instead of (unless you have to) or in addition to the official picks, but I'll take a closer look at both main asian handicaps and straight home/away win bets in the summer.

Anyway, there's plenty to look forward to, both in 2018 and in the years to come, and it's good to know that there's many alternative ways of following these picks if you can't take (some of) the official bets or are more comfortable with some other method. As far as I'm concerned, I'll continue to both take these bets exactly as I advise them and use a forty-point bank.

Btw if you're wondering how on earth did the results based on closing odds outperform the results based on recorded odds (not only in 2017, but for quite a few consecutive years), let me point you to a couple of blog (http://bettingwithskeeve.blogspot.com/2017/02/closingkick-off-odds-part-one.html) posts (http://bettingwithskeeve.blogspot.com/2017/04/april-fools-day-odds.html).