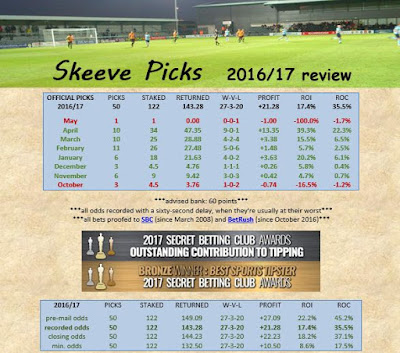 The 2016/17 season here at Skeeve Picks is now officially over and it's been an excellent one - if you'd like to read the 2016/17 season review, feel free to send me an e-mail (skeevepicks@gmail.com) and I'll be glad to send you the five-page pdf file. Let me know if you want to be on the waiting list for the 2017/18 season as well.

Also, when I was double-checking all of the numbers during the work on the season review, I've noticed a couple of mistakes (nothing recent, but from a few years ago), so mea culpa for that. I've now updated all of the numbers both on the official website and here on the blog (for instance, I've advised 1517 official picks so far instead of 1510 after all and my all-time ROC is a bit better than I though it was - it's actually 753.4%).

Posted by skeeve at 9:44 pm No comments:

April was a near-perfect month with as many as nine of the ten official bets landing - can't get much better than that. April was also my 6th consecutive profitable month and my 15th profitable month out of the last 16 active months. Seven of the eight (four-point) asian handicap bets landed for a +9.04 point profit at a 28.3% ROI, while both (one-point) bets on outsiders landed as well for an additional +4.31 point profit at a 215.5% ROI.

There was a couple of unofficial bets based on late team news in April, one of which failed miserably on the first day of the month, while the other landed on the closing day of the regular season - to be honest, I didn't think I'd advise another unofficial last-minute pick this season after the April 1 fiasco (it's the biggest shock result of the season by far), but then Dag & Red who had confirmed their play-off spot in a previous game decided to go with the reserve team, while full-strength, in-form strugglers Woking needed a point to be safe.